The Four Questions that AAI Refuses to Answer

I first asked these four questions in an email to Bill Flavell on 9 July 2022:

On 29 January 2018 Gail told Atheist Ireland that both they (AI) and the Atheist Union of Greece were two of six current members of AAI.

In your email on 1 July you said: "I reported to the board on March 2, 2018 ... that AAI had only two affiliates eligible to attend the AGM; Atheist Alliance of America and Atheist Society of Nigeria." So both Atheist Ireland and the Atheist Union of Greece had obviously dropped off the membership list by the start of March 2018.

You also told me that you found an email sent by Howard to seven organisations. That email, sent on 29 March 2018, discussed the proposed bylaws that would be voted on at the "AGM". One of the seven organisations the email was sent to was the Atheist Union of Greece. So their Affiliate Membership had obviously been restored by the end of March.

1. What date is on the invoice for the 2018 Affiliate Membership fee that was sent to the Atheist Union of Greece?

2. Do you know what date that invoice was sent to the Atheist Union of Greece?

3. Did Gail follow up with the Atheist Union of Greece on the unpaid invoice, on or around 11 April 2018, in an email where she discussed issues related to the upcoming "AGM"?

4. On what date did the Atheist Union of Greece pay that invoice?

Bill has never replied to that email, or any email from me since then.

I repeatedly asked Bill the same questions whenever he commented on one of Shirley Rivera’s Facebook posts, e.g. under this post:

… but while Bill engaged with many other people in those comments, he always ignored me. He was aware of my questions, because when Michael Nugent made a joke about Bill ignoring me, Bill added a laugh emoji to Michael’s comment: 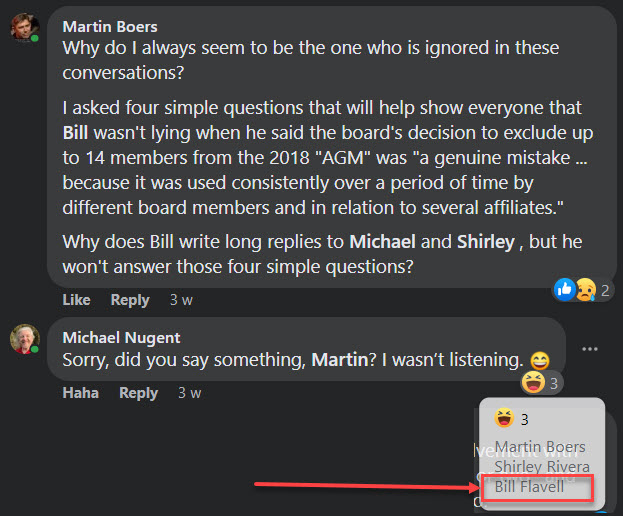 On 6 August 2022 I sent an email to all AAI board members, in which I asked them the same four questions, and told them that Bill Flavell had repeatedly refused to answer those questions.

Finally, Bill replied to one of my comments on 14 August 2022, under this Facebook post from Shirley Rivera: 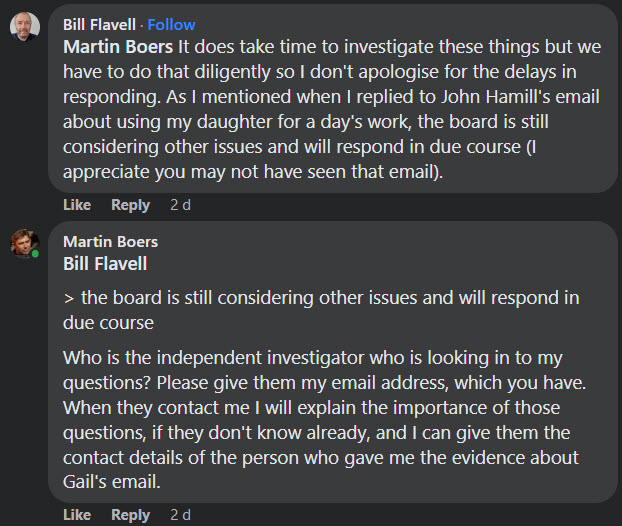 “The board is still considering other issues”. For six weeks (and counting). Four simple questions.

It is obvious that the only “consideration” that AAI is giving to these questions, is what story to invent to try and explain the answers. I predict that no one at AAI will ever answer these questions, because the board of AAI is unable to invent a story that wouldn’t make Bill Flavell look like a serial liar, and the entire AAI organisation illegitimate.

This article was originally published on The Free Thought Prophet Blog in August 2022.

Popular posts from this blog

Atheist Alliance International is an illegitimate organisation.
Change my mind. 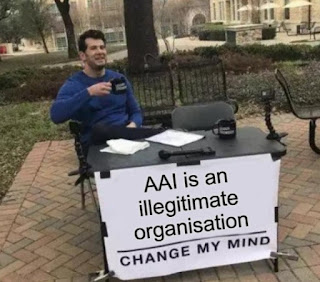 by Martin Boers Bill Flavell, the purported "Secretary" of Atheist Alliance International, recently claimed (in a comment under a  Facebook post by Shirley Rivera ) that he had "a large volume of baseless allegations [against AAI] to field". As this article will demonstrate, there are at least some allegations regarding AAI that have a strong foundation, and which raise serious questions about the legitimacy of the AAI organisation. Why does it matter? If the allegations against AAI described in this article are true, then there has been no legitimate board of Atheist Alliance International since 1 January 2018, and no legitimate AGM of that organisation since 2016. That would be an extremely serious situation for the only atheist organisation to hold Special Consultative Status at the United Nations. It has been claimed by past and present AAI board members that the allegations described in this article are merely "administrative" issues, and these alle
Read more

How One Man Destroyed the Legitimacy of Atheist Alliance International